How RFID Tags are Designed, Manufactured and Packaged

RFID tags come in various types and categories, and choosing the correct type is important in achieving optimal application. This article is intended to give an insight into understanding the choices made in designing RFID tags, and how these aspects can affect applications.

There are three different components of an RFID tag: an RFID chip, comprised of an integrated circuit (IC), an antenna and an underlying layer/base (known as the substrate). These components are not typically created in house by the tag manufacturers, instead workload is spread out to other manufacturers.

For passive RFID, when tags are not interacting with a reader, they are totally unpowered. Once the reader initiates a data exchange, it first drives the antenna for typically 15 to 50 microseconds to charge the capacitor of the tag and power it.

Finally, RFID tags can be customized depending on intended use. These customizations are primarily found in the enclosures, allowing users to choose one that will best suit the environment and attachment method the tag will encounter. Other customizations include sizes, power options, and frequency.

We can customize RFID tags, readers or any system for you. You can make a customization request here (URL). 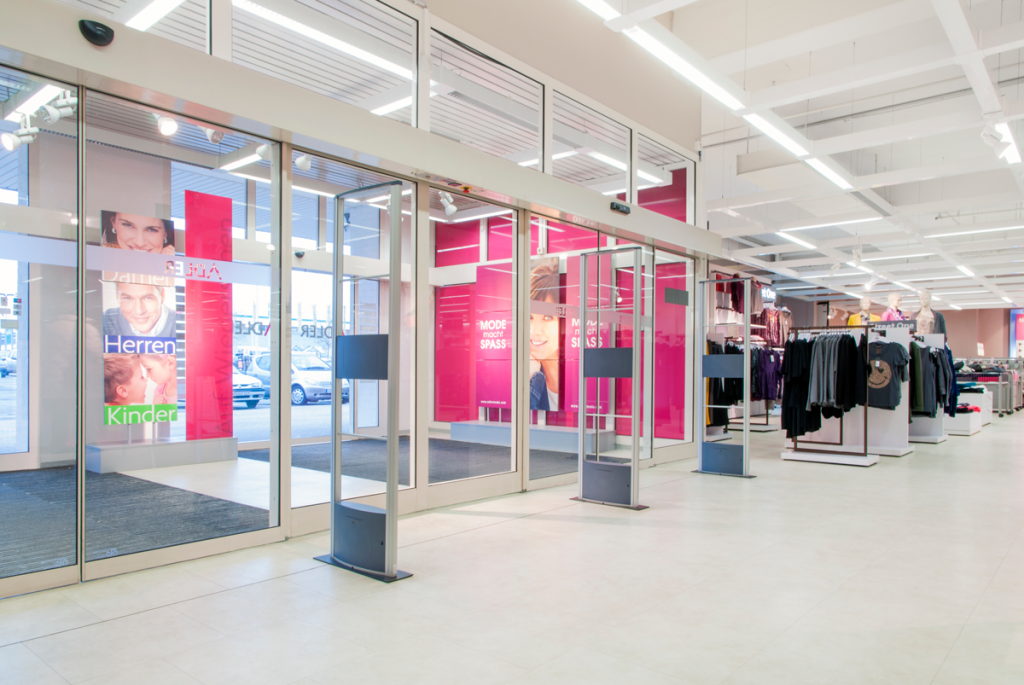 A passive RFID tag is divided into two main sections: the analog front-end and the digital section. The front-end tasks include all analog processing for DC power, incoming signal detection and information extraction (called demodulation) and the transmission of the modulation signal. The digital section decodes incoming data, responds to commands from the reader, reads and writes to internal EEPROM (electrically erasable programmable read-only memory) memory, and encodes and transmit data to the modulator. A backscatter modulator is a device used to modulate the impedance (the measure of the opposition that a circuit presents to a current when a voltage is applied) seen by the transponder’s antenna when transmitting, which decides the overall performance of the tag. The analog front-end is the key block of a passive RFID transponder. It provides a regulated voltage supply for the digital core and other circuits by correcting the incoming radio-frequency signal. While in transmitting mode, the analog front-end also works to ensure its communication method of backscatter modulation will function properly.

In the case of near-field passive wireless systems, a diode bridge rectifier can be used to convert the carrier signal to DC.

Far-field RFID tags, on the other hand, require an efficient way to convert RF to DC. Voltage multipliers that increase voltage levels whilst performing the conversion are used, due to the low voltage of the antenna.

Antennas are a critical part of designing the reader, as they are required to efficiently carry a signal to and from the tag. PCB tracks are commonly used to form a loop. The range of a tag is affected by various factors, such as:

Most designs aim for an antenna between 0.8 and 1.6 µH, as values below 0.8 µH become increasingly more difficult to sync. Maximum energy transfer occurs when the antenna and associated components are in resonance.

For the tag and reader to communicate, the impedance presented to the transponder’s antenna has to be varied to modulate the reflected power. To achieve this change, a transistor is inserted between the two antenna terminals which when turned on will short the antenna terminal, effectively presenting a short circuit that cuts off power and signal from flowing. When the transistor is off, it has no effect on the antenna and the rest of the modules. The process of varying the impedance is a type of modulation based on backscattering.

Modulation is the process of modifying the characteristics of a signal, called a carrier wave, to convey information. These characteristics include amplitude, phase, and frequency. For example, Amplitude Shift Keying (ASK) modifies the amplitude of the signal as the name implies. A protocol standard chooses the amplitude modulation used to convey data from the reader to tag. From that point, the signal will need to be demodulated for the information to be extracted.

An IC, also known as a microchip, is designed and manufactured by a semiconductor manufacturer. Contained within the IC is a logic unit in charge of making decisions and allocating memory to store data. How the IC obtains power depends on the type of tag; in an active tag, it comes from a battery on the tag, while in a passive tag, it is obtained from the interrogating electromagnetic signal generated by the reader. The memory on the IC may be divided into different blocks called banks. Tags use EEPROM memory type, which does not require continuous power to store data and thus can retain data for a long period without the need for power. Data type stored depends on the protocol used. The IC may store tag ID, object identifier, password and error detection codes.

ICs are created on a large semiconductor wafer, which can contain 40,000 ICs. They are manufactured in state-of-the-art clean room facilities and individually tested to ensure reliability. IC designs are headed towards becoming smaller, which reduces the cost and power needed to function.

The largest connected part of the IC of a tag is called the antenna. This component receives signals from the interrogator and depending on the tag type, will either transmit or reflect the received signal. For active, it transmits the signals, and for semi-passive and passive tags, it reflects the signals. Furthermore, for passive tags, the antenna also collects power from the radio waves and supplies it to the IC.

The shape of the antenna is determined by the tag’s operation frequency. Variations in the design of the antenna allow tags to have different properties and behaviors. The antennas can be shaped like a spiral coil, a single dipole, two dipoles perpendicular to the other, or a folded dipole. Many variations of these basic types exist and are chosen depending on the specific requirements of its users and the abilities of the designer. The antenna is designed for a specific frequency and is later tuned to be appropriate for properties of the materials to be tagged. This frequency determines the effective antenna length, but the actual length is usually shortened by design.

The antennas are usually made from thin metal strips of copper, aluminum, or silver. They are placed on the substrate via one of three methods: copper etching, foil stamping, and screen-printing. Screen-printing is the fastest and cheapest method but creates the least efficient antennas

This is the layer that holds all the other components together. A substrate is usually made from a flexible material such as thin plastic but can also be made from a rigid material. Most passive tags use substrates of flexible material. The material is selected to withstand various expected environmental conditions that the tag is to encounter in its lifecycle. Some materials include polymers, PVC (polyvinyl chloride), polyesters, styrene, and paper. The material used must provide a smooth printing surface for antenna layout, durability, and stability under various conditions, dissipation of static buildup, and mechanical protection for the components and their interconnections. The substrate is designed to withstand conditions such as sunlight, chemicals, heat, moisture, vibration, impact and corrosion.

The substrate material may affect the design frequency of the antenna, which must be considered during the proper tuning of the antenna. Adhesive material designed to withstand the appropriate environmental conditions is used on one side of the substrate to attach the tag to an object. A protective overlay made from materials such as PVC lamination, epoxy resin or adhesive paper is sometimes added to provide additional protection.

An inlay or insert is a complete tag that is ready to be embedded in a label or encapsulated and consists of all the components already attached to the substrate. During this stage, adhesives are typically not yet added. Furthermore, during the production of the inlays, RFID functions are embedded into the labels by converters or label makers.

Inlays are classified as either wet or dry. Wet inlays have adhesive applied to the inlay, while dry inlays are attached without the use of an adhesive, such as by bolting the tag to the inlay.

Smart labels, or labels as they are typically called, are composed of thin sheets of various materials in layers with an embedded inlay in the layers. The material used for these layers usually include the linear or carrier sheet, inlay, inlay adhesive, face stock adhesive, label material, linear release coating, and label top coat. Barcodes and textual information are typically printed on the label material.

Labels come in various sizes and different types of tags depending on the material to be tagged. They provide logistical information for shipping and handling of products and allow RFID encoding to be used in parallel to any current barcode and human readable systems. These labels are designed to provide an easy way to implement RFID systems within supply chains, particularly for companies that want both RFID and ongoing barcoding systems. This kind of packaging tends to be more affordable.

RFID inlays are sometimes contained inside a hard case. This case is made of materials such as PET (polyethylene terephthalate), polypropylene, and Elastomere. These cases are used to protect the tags within from harsh environments during usage, such as extreme temperatures or pressure. For example, these tags are used for containers in closed-loop systems and returnable assets in the supply chain. The size and shape of the case may be designed to provide isolation from the object so the tag may be attached to metal objects, and some case designs provide other methods of tag attachment, such as bolting or riveting.

Antennas are typically designed to work in certain environments, thus an unexpected environmental condition can affect the tag’s read range or read rate. Encapsulation not only allows the tag to endure harsh environments but can also ensure desired specifications when these unwanted conditions are encountered. For example, the antenna may be weakened due to corrosive chemicals in the environment. Therefore, environmental conditions should be evaluated in any environment the tag will travel through in its entire life to ensure proper encapsulation for optimal performance and longevity.

We can customize RFID tags, readers or any system for you. You can make a customization request here